(SOLVED)- Colonial Tap Company CTC is a manufacturer of taps and

Colonial Tap Company (CTC) is a manufacturer of taps and fittings for the plumbing trade, located in Brisbane. The company was established by Ken Hall in 1951, with a workforce of 10, to meet the needs of the postwar housing boom. Its product range was fairly limited but the company had an excellent reputation for quality.
Nowadays, CTC manufactures an extensive range of high-quality brass and chrome taps. The company is managed by Ken’s son Michael and employs 20 people. It has annual sales averaging approximately $1 million, although it has been consistently profitable. CTC has experienced increasing pressure from competitors since the early 2000s. The company uses a cost-plus approach to pricing but is having to reduce its markup constantly in order to maintain market share.
Both Ken and Michael qualified as engineers. The business is small and has never been able to employ an accountant. Instead, a bookkeeper calculates monthly profit as sales revenue minus expenses. Prices are based on rough estimates of cost of direct material and direct labour inputs plus a 50 per cent markup. With the decline in profit and constant pressure on prices. Michael began to feel uneasy about the way costs and profits were calculated. The results for the month just ended were: 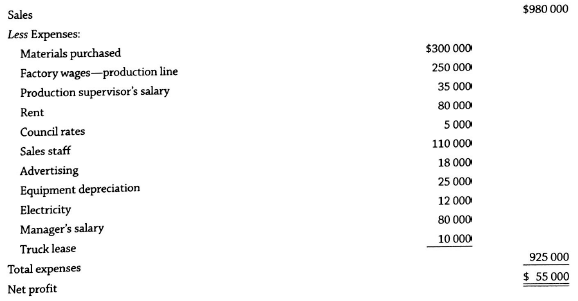 Additional information:
â–  There was virtually no beginning inventory of raw material, work in process and finished goods.
â–  At the end of the month, to per cent of the materials purchased remained on hand, work in process amounted to 20 per cent of the manufacturing costs incurred during the month, and finished goods inventories were negligible.
â–  The factory occupies 8o per cent of the premises, the sales area 15 per cent and administration 5 per cent.
â–  Most of the equipment is used for manufacturing, with only 5 per cent of the equipment being used for sales and administrative functions.
â–  Almost all of the electricity is consumed in the factory.
â–  The truck is used to deliver finished goods to customers.
â–  Michael Wall spends about one-half of his time on factory management, one-third in the sales area and the rest on administration.
Required:
Michael Pall asks you to review the results for the month and evaluate the company’s approach tc estimating product costs. In doing so, you should:
1. Comment on the cost classifications used in CTC’s income statement.
2. Estimate the cost of goods manufactured and sold.
3. Prepare a revised income statement for the month.
4. Explain the differences between your income statement and the one above.
5. IF possible, suggest a more useful format for analysing costs than that used in your revised inc statement.
6. Evaluate the usefulness of product costs based on direct materials and direct labour for detour, selling prices.
7. Make recommendations for changes to be made to the company’s approach to product costing reporting profit.

Need a custom & unique solution to this question? Engage customer support on the LIVE CHAT on this page.